This last year’s Ironman Wisconsin overall women’s champion is Dani Fischer, a University of Wisconsin alumnus, a member of the Borah Teamwear family, and a truly inspirational young woman.  From the very first time Dani walked into the Trek store where I worked, we had an immediate connection. There was just something about her, beyond the dimples, that I knew was special.  When I came to Borah, she was the very first person I wanted to add to our family.  I made the suggestion to our marketing guy and we haven’t looked back.  I hope it is a long, long relationship.  – Tad Hylkema Director of Business Development

Dani’s road to becoming the most recent Ironman Wisconsin champion was unconventional, to say the least.  She was always an active individual growing up, participating in soccer, basketball, track, and lacrosse.  She walked on to the women’s soccer team at the University of Wisconsin and played for two years before joining the cross country and track teams for her remaining collegiate years.  In 2013, she announced to her family and friends that she was going to win the Crazylegs Classic in Madison because the first place prize was a Trek bike – and she did just that.  All while working as a full-time pharmacist, Dani started competing in duathlons before deciding to expand into triathlons, finishing her first Ironman in 2016.  Dani held her professional triathlete license in 2015 and 2016, eventually experiencing a period of overtraining and burnout that made her revisit what about the sport brought her joy in the first place.  She let her pro license expire and got back to her roots in age group racing in 2017.  We all know what happens next!

If you take inventory of Dani Fischer’s Facebook page on the topic of Ironman Wisconsin 2017, you will see over 281 posts and comments, and 2,729 likes.  You will notice the outpouring of love and support that she has from family, friends, and even perfect strangers.  A selection of the words and phrases used to describe Danielle in these posts include: a true champion, amazing, brilliant, humble, kind, strong, determined, unbelievable, incredible, accomplished, badass, a hero, beastmode, a winner, ridiculous, a rockstar, talented, dedicated, passionate, an absolute assassin on race day, and most notably, an inspiration.  “Dani Fischer is one of the coolest people this sport has ever introduced me to.”  “Such an amazing accomplishment by one of the most genuine human beings.”  “Dani Fischer has the approach to life and sport that everyone should aspire to. Thanks for inspiring us all!!” “She is an amazing human being on so many levels!”  “Dani Fischer is the reason we dream big.”  “Dani is the most incredible human being.  I’m humbled and inspired by all that she is!!!”  “Truly a woman to look up to.”

Finishing an Ironman is an accomplishment in itself.  Winning an Ironman with a time of 9 hours, 57 minutes, and 41 seconds – 43 minutes faster than the next female – is something dreams are made of.  Being an incredible person who inspires every person they come into contact with is truly mind-blowing.  Dani balances her fierce competitiveness with a love and respect for others that is a rarity.  She is an amazing athlete, and an even more amazing human.  In a recent podcast, she stated, “I knew I was going to come back [to Ironman Wisconsin] in 2017 and win the thing.”  If you know Dani, this statement is not cocky.  This statement says, ‘I can do anything I set my mind to, and I hope it shows others that they can too.’  Dani has always said that she enjoys racing not because she wins, but because of the people she shares the races with.  She wants to challenge herself, but doesn’t thrive in doing that alone.

Dani’s ultimate goal is to be a role model for other young female athletes and help boost interest in competitive sports like distance running and triathlons.  The evidence surrounding her success in doing so is overwhelming.  You see it in the fans that cheer for her on race day – a family from Milwaukee that she met after the USAT National Championships in 2012, friends that travel hours from different states, friends from Wisconsin, her family that wouldn’t miss the race for the world, other athletes that she has met during previous races, a woman that she met and befriended in the park after a workout earlier in the week, and strangers that have never met Dani but know of her because of her success.  There is even a story of a group of women chanting Dani’s name during a spinning class in Madison in order to motivate themselves to go as hard as they possibly could during their workout.

We are all impressed and inspired by Dani’s accomplishments; it is impossible not to be.  The legacy that she has built, however, is not in the race times, medals, and trophies that she holds.  It is in the example that she sets for us all.  With hard work, determination, and a kind heart, you can accomplish anything.  Believe in yourself and you will do amazing things.  Always treat others with respect and compassion and it will return to you tenfold.  Take in every moment as if you’ll never experience it again and you can inspire others and make a real difference.  Dani is a champion, both on paper and in our hearts, and we could not be more proud to have her in our lives. 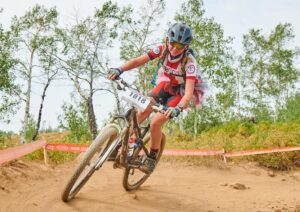 Who Said It’s a Man’s World?

Nordic Race Suits: What Are the Differences?

One of the most frequently asked questions Borah receives goes something like “can you help me understand the differences between each of your race suits?”